Duchess Bune & The One Hidden Gem To Genuine Femininity

“Women are not taught to honour themselves, for a woman who honours herself is dangerous. She cannot be controlled and will not be dominated to someone’s choosing. Divine Love speaks of Self-Care. Taking care of yourself is not optional. It is your birthright.” — Page 37, Chapter 5 : Rising In Holy Divine Love For Self : THE SOVEREIGN FEMININE ; CREATING GODDESS CONSCIOUSNESS FOR THE MODERN WOMAN

Lady Duchess Bune is also known as an old god (despite her being a lady) and is one of the Goetic Daemons and Spirit of aristocracy, necromancy, feminine charm, eloquency, wit, sex magick, and financial savvy.

Known to rule equally over money and opportunities, her talents lie in creating the feminine charm and procuring the womanly arts of elegance, grace, sophistication, and poise. She governs seduction and has great worldly knowledge. The Duchess is sought for her assistance with financial affairs by MANY and she mentors in the arts of motherhood, wifedom, feminine hospitality, elegance, refinement, dignity, Goddess allure, sexuality, grace, poise, and social etiquette.

Below is her SIGIL, and if one wishes to summon her, flank 2 green candles, sandalwood incense, and her sigil. Her calling ENN, is WEL MELAN AHVAGE BUNE TASA which needs to be chanted, until one feels she is of presence with thouest.

Quieten your mind, and thou shalt be able to speak with her. Bune’s voice is very sweet, filled with elegant charm, and hypnotic although, she can be ruthless, fierce, and lethal, if she sees the energy requires it to be as such.

She, afterall rules the legionnaire of NECROMANCY and One does not play games, with a necromancer. EVER. It does not end well. All Occultists know this, including myself. 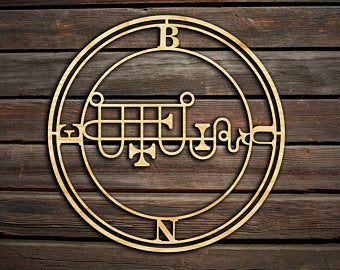 Bune speaks about Femininity, in a way that is exceptionally simple to understand and fascinating to the mind. Working with her, especially if you are a woman, will change your life. Her ability to empower a woman to carry herself with grace, charm, and ease, is second to none. Lady Bune, teaches the arts of poise and sophistication and provides a typical high society flare to any woman, wanting to assimilate into that world (whether she belongs there or not). What would have taken me months of Etiquette training personally, was shortened down by The Dutchess, and jazzed up with a Spartanite flair of courage and emboldened power. Thank you Bune, I love you so dearly <3

Many women do not operate from Feminine Consciousness, and wonder why they struggle to remain relevant in a man's mind. They possess visual femininity, and Bune stresses highly on the hair, nails, makeup, wearing pretty dresses and skirts, perfume, and elegance part — however, she mentors deeply on the Feminine Courthouse of Royalty. She often stresses that when women have polished manners (and yes Bune DOES swear on the very odd occasion when she needs to, although aristocratic and ladylike — she has her fierce side and really does not care), invisible doors open for her. She speaks on the matters of refinement, eloquency in speech, mannerism, and the written word that other people read, as well as speaking on Seduction and Submission that enchants many.

There are THREE types of women in this world.

Lady Bune often speaks about embodying and loving yourself, a concept that I cover in ALL of The Sovereign Feminine. Deep Love for Oneself, a self-soothing, radiant, beauty, independent, gratitude — the hidden gem of genuine feminine consciousness. Women with this consciousness, belong to THE GODDESS, and deeply practice self-care, and value themselves highly. The hidden gem of a woman focused on herself, is true Divinity. It is exceptionally challenging to have outer femininity and still behave like a man, with a man. Men know masculine energy, for it is THEIR energy and there are times and places for a woman to operate in it, and the rest is a disaster.

Bune created a special enchanted pretty piece to assist Ladies to rise into their self worth and power, by putting themselves first for self care, and treating themselves with honour, dignity, and respect. With an inbuilt charm generator, and boundary enhancer —this sparkling piece helps you radiant beauty, confidence, and grace that makes you stand out.

The Art Of Being a Lady, is one of the toughest challenges a modern woman can face. We do not have Ladylike women in Society any longer. Women have been incorrectly, brainwashed to think behaving like a man, is attractive to men. Traits of refinement allow for a woman  to carry herself gracefully in public in respectable societal roles such as being a wife, mother, daughter, and a sister. They provide her confidence and empowerment from a place of honoured Feminine shine. 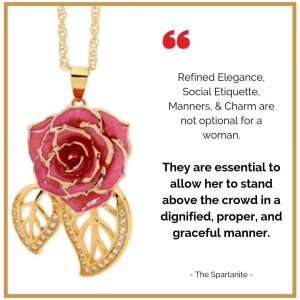 Isn’t it time you rose into DIVINE LOVE FOR YOURSELF and treated yourself with the respect you deserve? After all, why should you be a Queen, when you can be THE EMPRESS?

Click here to begin your journey to Elegant Feminine Charm